SF Chronicle Columnist Chuck Nevius gave a bit of ink to my proposal to reform the DCCC. 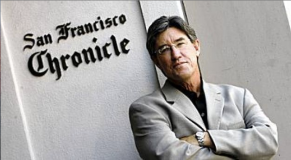 “Give me a D, give me a triple C: There was a time when San Francisco’s Democratic County Central Committee was a good place for newcomers to politics to dip a toe into the political process and build some credibility.

Not this year. Some of the biggest names in local politics are in the race for the June 8 election. That includes every sitting Board of Supervisors member except Katy Tang and John Avalos.

“What we’ve learned,” says DCCC Treasurer Tom Hsieh, “is that if you have a name you tend to win. If the ballot went forward today, we could have nine of 11 supervisors on the DCCC.”

Naturally, there’s been a lot of complaining that the fix is in and that newly elected Supervisor Aaron Peskin is trying to pull a fast one by stocking the DCCC with progressives. And there’s also concern from members like Alix Rosenthal that “without grassroots activists there will be nobody to do the actual work. These people will show up at meetings and that’s it.”

It sounds like another of those circular debates that ends up with two sides yelling, “I’m not, you are!” for days. But in a surprisingly thoughtful moment, Rosenthal has come up with a good compromise.

She proposed that the elected supervisors automatically get a place, called an “ex officio” seat, just like state senators, Assembly members and U.S. senators and representatives. Rosenthal’s measure would then add 12 seats, 11 for the supervisors and one for the mayor, so there would be a chance for less-experienced politicians.

The measure was proposed last week and despite needing a two-thirds majority, it fell just one vote short. Rosenthal says she’s bringing it back.

“Who knew a volunteer position could be so exciting?” Hsieh said.

The entire column may be found here.